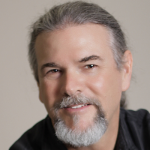 Career Capsule: My first day in Christian radio came in 1999. I was invited to join the team at a fairly new WCLN-FM in Fayetteville, NC following a 20-year stint as a communications technician in the Army, and a few years as the owner of a marketing and graphic design company serving clients focused on the entertainment industry. Starting in marketing and sales for the commercial station, my roles changed as the company grew, eventually acquiring AM and FM signals in nearby small markets, and I became General Manager in 2004. My wife and I formed a company after being offered the opportunity to purchase WCLN, which we did in 2017.

WCLN relocated its studios and offices over the summer. The unfortunate need to work from home as we adjusted to life in a pandemic gave us the room and time we needed to pack, move, paint and build our way into a more ‘homey’ atmosphere.

How has your WCLN show changed during the pandemic?

Our on-air presentation itself hasn’t really changed. We’re a little better at voice-tracking and working remotely, but offering hope is still the norm. Demonstrating peace in a storm is the proof our hope is real. Encouraging others reminds us of the peace we can have. If it’s not real to us, we’re nothing more than carnival barkers to offer it. In favor of more a personal approach, we may talk less about the latest flavor at the big coffee chain, but we still keep our finger on the pulse of what it means to be a local friend.

Forever wise in my sight, Mark Pluimmer (KSLT, Mission of Mercy, OneChild) once told me not to worry about the ‘crusaders’. There are always critics from within the church and within our audience who would have done whatever we’re doing better or different. Listening to a critic and considering their perspective can often be enlightening.  but following God, embracing your mission, and boldly moving toward the next goal outweigh the “…as a Christian I thought I should tell you” calls or emails.

That’s a loaded question, so the only good response is a loaded answer: It depends on the station. A well programmed, locally-focused station is a joy to have elsewhere on the dial. A syndicated or repeated station with no concern for what is happening within its coverage area is like a jukebox playing someone else’s quarter.

Podcasts are a blessing to music-focused radio. Besides providing an extension of what we do on the air, they allow us room to cultivate specialty talk programs, which (if we’re wise) will incorporate local voices and events to draw new listeners as we continue to grow and feed our base.

Good question. I’m leaning into young adults who may have abandoned radio an iPhone or two ago. They are a totally different breed than what we have come to expect. More real. More honest. And much more in the moment.

In this era, resistance to change will likely be the thing that will defeats those who stick too closely to the lane they started in.

Heroes is a difficult concept for me, but influences? I have long respected talented storytellers like Sterling Tarrant, Dan O’Day, and others.

Jesus relayed the true story of who God is in such creative ways through His many parables, and that’s just one more way we can follow His example.

One thought on “Dan DeBruler Interview”