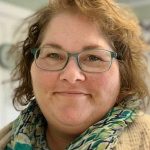 Career Capsule: I was that 12 year old kid that called the studio line every time I heard the contest burst, I am sure to the chagrin of every on-air personality! This Yankee was raised in Sand Springs, Oklahoma by my grandmother after my mom passed when I was 3. The local station, KXOJ was my friend, calmed my heart and gave me church solo material. In 1999 my family moved from Ferguson, Missouri to Vermont. Former GM, Ric McClary, called me and shared that he believed that the Lord was calling him to invite me to host a show on-air.  After praying with my husband, I agreed to see what God had for us with radio. Well… Since then I have been with CMI, The Light Radio Network in almost every capacity possible short of engineer. I started out with a Saturday evening show called “Heather or Not”, I then went to Noon Hour and currently co-host Mornings with Shawn & Heather. In June I accepted a full time position as the Promotions/Media Director & On-Air host.

I am what’s new at The Light Radio Network, haha, ok not new…but adding a fulltime position in a small non-com network is a HUGE thing. I now get to do more with our social media platforms, organizing events like bringing a Chick-fil-a truck to one of 3 states with no CFA! I also get to preach at the local “Ladies” Prison and other speaking engagements.

We just wrapped up our two day “Fall Share” pledge drive and it is always exciting to see our friends step out in faith to keep the ministry and mission of the Light ALIVE. Three of our daughters have launched into life as adults and our “Surprise” Scarlett is 8 and jumping into third grade in a new community as we moved from the mountains to be closer to the station. Blizzards in Vermont made for early mornings with that old commute. My hubs, Craig & I serve in leadership at our church and just celebrated our 25th year of marriage? God is so kind to us!

I hear Christian Radio has become very competitive, but I don’t know what that really looks like in the Kingdom of God. We are focused on bringing Jesus to the Northeast! That is our assignment, so to fear any other network would be nuts, because there is no limit when you are walking out obedience to a call from God. Posturing our hearts to the Lord and letting him open and close doors is more our speed at The Light. It’s super exciting.

The best advice I’ve been given was from my lifegroup leader, Stacy.  She encouraged me to FILTER out the crazy things that aren’t beneficial, stay close to the Heart of the Father and to pour out Joy! Soooo, the worst advice I have ever received is to follow my heart. GAH! That thing is wicked and who could know it.

I live in the least churched state in the Union… Vermont, so more is better. We strive to add stations to our network in the Northeast, keeping a local voice with a blend of live talk, music, preaching, teaching and encouragement.  The other stations in our listening area are also a tremendous blessing to our entire region!

How would you describe The Light Radio Network audience?

Our audience is LOYAL! Many listen longer than average. They are faithful in praying for us and supporting The Light financially. Surprisingly, about 30% of our listener-ship is unchurched. Either they are not Christians or they don’t attend regular church services.

Christian Radio could improve by talking about Jesus. Not just the short features that are mini sermons, but the personalities themselves should share more deeply about Jesus. We have been given hearts to steward and I believe that our opportunity to go to the depths with them is worth the risk.

My career in radio was influenced by my friends in St. Louis, Steve & DC. From 1995 to 1999 I was an insider, but not on air…around the guts of a #1 Arbitron rated, syndicated show, I LOVED every minute. I would attend remotes with them and shows that they emcee’d. I am inspired by my consultant, Rob Wagman, who made me cry the first time I met him. He was like a care bear of encouragement and helped me see my value on air. I am also sooo influenced (good) by Brant Hansen and listen to his show almost every day!  I marvel at their (Brant & Sherri) tenderness to sharing the Gospel, creativity and humour! I relate to the odd things and peculiar people, so Brant really gives me permission to be me!

One thought on “Heather Sheppard Interview”