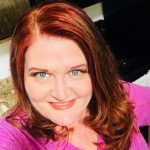 Career Capsule: My first radio job was in Tyler Texas, while I was a sophomore attending TJC as a voice major.  I did weekends for four years until I landed a major market gig in Dallas at KJMZ 100.3 as Champagne.  At that point, I realized I loved Radio!!!!!  I then moved to Norfolk Virginia for 4 years, to be midday personality/APD at an AC station.  In the 1990’s, I joined the KVIL on air staff working late nights for 14 years, working with the legendary Ron Chapman.  KVIL eliminated my position in 2008.  I spent 2008 to 2015 working for an AM station in Dallas, ABC Radio Networks and a traffic company, until Mike Prendergast sent me a message and hired me part time at KLTY in April 2015.

Maryrose, tell us what’s new at KLTY, news and with you?

As a believer in Jesus Christ, I feel very blessed, grateful and favored to be at KLTY.  I’ve been blessed with the #1 show at night, 6 plus and women 25-54 for six straight months.  The whole air staff has their own unique traits.  Frank Reed is our captain and he’s so down to earth.  Starlene is our Star around KLTY, always lighting up a room.  John Hudson I call “Hudsie”,  he’s like another brother to me, and so talented and keeps us all on our toes!  Tony Lopez and I worked together years ago at KVIL, and he’s a great jock, and I love doing my Ginger fun videos with him.  Bonnie Curry is so creative-and that voice!!!!  I don’t know how our PD Mike Prendergast handles us all, maybe that’s why he went pre mature gray!

How has your KLTY show changed during the pandemic?

I found it important to encourage my listeners to lean into faith, not fear, and just be there for them.   It was a little weird working from my home studio for almost a month, as I LOVE being in studio 😊

What is the best programming/show advice you’ve been given?  The worst?

Ron Chapman once told me, “Radio is theatre of the mind”.  That is so true, try to make an impact in 8 seconds, it’s not the easiest thing to do!

Be authentic on the air.  Just be you!  The funny things you do in the hallway, do that on the air!

I really can’t think of one thing that was bad advice, but will tell you to not give out the wrong call letters!!! LOL

Some say the more Christian stations in a market the “better”….What’s your opinion?

As long as you have KLTY on all the time, I’m ok with it.

What’s your opinion on podcasts…Is it necessary to have one, are they a threat to radio…etc.?

Podcasts are fine, I think everyone has a way to get information and entertainment.  There are many different outlets to choose from today.

I do not think they are a threat to radio.  Who doesn’t like to hear their favorite song blaring on the radio!  At KLTY, we are live, local and each of us have unique gifts on the air.  Again, make someone smile in 8 seconds, it’s not an easy thing to do!  Ask my boss 😊

Who knows?  God knows though😊  I did secular radio until KLTY hired me in 2015.  I came into a relationship with Jesus in 2008 and that changed the trajectory of my career.  It was my husband Curtis, who told me in 2013 that I needed to be working in Christian radio.   I knew when Mike hired me that God had called me to be on the air at KLTY.  When God puts something on your heart, no man can take away.  Curtis tells me each night before I go on the air, “Go out and encourage those women to the Lord tonight!”  I have tears typing this that God gave me a talent that I can use for HIS glory! God is good, All The Time!

If there is an obstacle, I’m gonna jump over it, go around it, or just plain run through it.

Ron Chapman.  He was a genius on the air!  You would wanted to know what he would say next because you never knew.

Pamela Steele, she does voice work now, but I listened to her as a kid and loved her sound and personality.

Everyone at KLTY from Frank, Starlene & Hudson to Tony and Bonnie-I admire them and feel privileged and honored to work with all of them.

Mike Prendergast for believing in me and giving me a chance at a full time on air shift.  Don’t ever give up on something God has put on your heart!  FYI- From 2008 to 2014 I worked 7 days a week, I worked 3 different jobs to make ends meet.  I knew God had a plan, but I had to continue to put one foot in front of the other and do the next right thing!

When I sign off the air, I say “Be Blessed, go out and encourage someone tonight” 😊 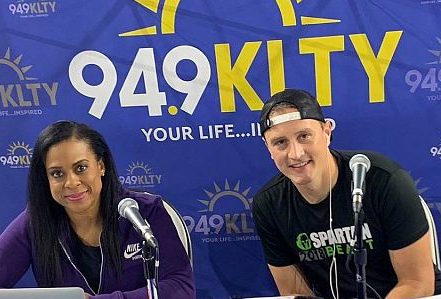 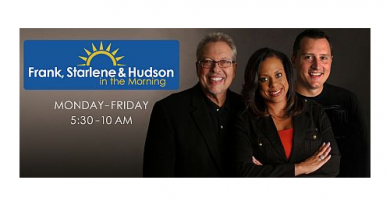