Career Capsule: October 1st was 50 years since my first day on the air at WWST in Wooster, Ohio. I started on my 14th birthday, and I’ve been on the radio ever since.  Fifty years later, I still do recorded liners on that station.

I was 17 when I did my first morning show in Columbus, Ohio.  Then I transferred to Oral Roberts University in Tulsa and did a morning show on FM96 during college.

I met my longtime radio partner, Jerry Cesak, and our show began in Detroit.  We were three years in Chicago and then almost thirty years in San Diego.  When Jerry retired, my wife Kris and I had been doing some pretty heavy work in our home group about totally surrendering to God’s plan for your life, so we turned it over to Him, like never before.  He did have a plan and K-LOVE called with it.

Jeff, tell us what’s new at KLOVE… news, changes, & new with YOU… etc?

God sent us Bill Reeves to be our new leader.  It’s such a clear sign that God has His hand on what goes on here at K-LOVE.  Everybody … everybody … from our Board Members who worked their tails off to find Bill, to all of us workers; everybody prayed and prayed for the entire year as the search went on.  It worked!  We loved this man from the first moment.  He is smart, decisive, visionary, and he is also kind, and funny, and loving.  He’s going to be an epic leader, but Bill might just be even better at being a man of God and a husband and father.  This station is one of the very few places I’ve worked for that carefully casts the staff, making sure we win in the halls before we even get to the part in the studio.

You’ve been at KLOVE and in Christian Radio for 2 years, what were your first impressions of the format?

Well, it feels exactly like what I’ve always done.  No difference.  I’m not a pastor and they didn’t hire me for that.  I’m just what I’ve always been … a quirky, funny DJ who happens to have given his life to Jesus at age 19.  All my listeners have known that through the years.  I never found the listeners/callers to be hyper critical or conservative or any way different from the people I’ve always talked to on the air.

After years as part of the “Jeff & Jer” mainstream radio show, how do you prepare differently now before you go on the air?

How do I prepare differently?  Well, I prepare.  This is the first time in my whole career that I have done any kind of prep.  I just always showed up with a bunch of ideas and tried to be rested enough to be sharp enough to create while in the studio.  We also had a big bunch of us doing our show for years, so there were many hands to implement it all.  Now, it’s just me and Randi and we prepare a whole show schedule.  I am enjoying that process and after a lifetime of taking screened calls live on the air, I really love doing the whole VoxPro thing for the first time.  It is so fun to cut up calls and move stuff around to Frankenstein the call into something better than it ever would have been live.

What advice did you get from friends, co-workers, etc regarding making the transition to Christian Radio?  (good & bad)

I got the same advice from Randy Chase here at work and from Traci Johnson, our Yoda.  “If you have any doubts, go ahead and say it.  We can always hone that and learn from how it played, but get in there and when in doubt, say it.” As to being a Christian DJ, I was told to just be who I’ve always been, a DJ who is a Christian, and trust that what needs to come out will come across.  I think it has.  It’s been sort of a healing thing in my life.  What I mean by that is that I have grown to like how He made me more than ever before and how that can be used to make a difference in people’s lives.  I think a lot of people who do what I do for a living feel “lucky” that there is a job where you can be like we are and still make a living, but the healing has come as I see that He made me quirky like this for His purpose.  I was honestly kind of ashamed for being such a goof for most of my life, and it sure feels great to finish well and see that lie for what it was and for who tried to put that lie in my heart.

How would you describe the KLOVE audience?

Caller after caller I often say, “No wonder you listen to this show.  You’re just like us!”  They remind me of me.

What guidelines are you given as an air personality at KLOVE?

That is a thing I love about this job.  We meet a lot, often, to go over breaks or to get a different ear on what we are doing, but it’s always in my favorite way of doing that.  I love how they do it … an intelligent, big picture, discussion about the art of doing this.  It’s the reason I’ve always loved radio bootcamps and seminars.  When it’s meeting day, it’s like I often am when going to any thing I “have” to do.  I’m grumpy on the way in, and when it’s over, I’m like a kid, “That was the greatest thing EVER!”

At KLOVE you & show partner Randi genuinely have a chemistry. What’s the secret to making it click with a co-host?

I’ve never had an agent or representation.  I’ve always thought God was my agent and He really came through again.  From the moment we walked into the restaurant and met Randi and her husband Bob, we loved them.  When does that ever happen in a team chemistry situation?  When?  I look forward to seeing her every day, just like I did for all those years with Jerry, Tommy, Laura, Randy and Emily on our San Diego show.  I’m so grateful that after 50 years I still get to walk through the door into a radio station with my headphones and have so much fun.

A guy named Ted Lux, in Cleveland, was the first person I ever heard who was just the guy he truly was when he was on the radio.  He called his mom on the air, and just sounded like a guy you’d know from your cul de sac, who just happened to get the microphone. That influenced me greatly.  Plus, I have always sought mentoring, and found so many kind people who were willing to give me their time and mentoring.  Ted Lux was the first of those.  Actually, my first mentor was my brother, Jon.  Jon knew he wanted to be on the radio from when we were kids and he made Tinkertoy microphones.  I’m living God’s plan, but I’m also coat-tailing Jon’s dream.  Here’s something that really makes me happy; Jon is on 1010 WINS in New York City (Jon Belmont 1010 WINS news).  Jon’s son, Scott Detrow, is on NPR, so since EMF bought WPLJ, there are times that all three of us are on New York City radio stations at the exact same time.  We’re like the Baldwin brothers, only with radio faces. 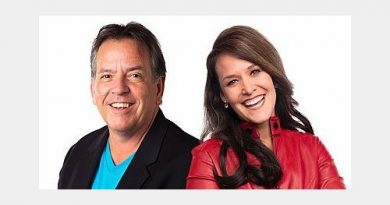 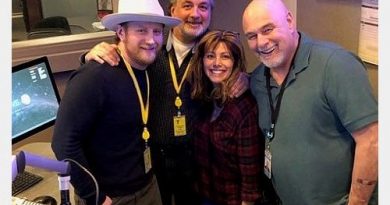