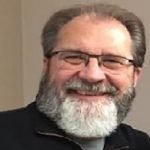 Career Capsule: I was born and raised in Detroit, Michigan and the surrounding area.  I’ve always loved music but wasn’t given the talent to be anything more than an average musician.  I discovered radio when I started working at the campus radio station, and immediately fell in love with it.  I got my first radio job in September of 1973.  I worked Top 40 and Rock formats in the early years, then spent 26 years doing Country Music.  God came back into my life in 2001….and a few years later I was given the opportunity to join Christian Radio.  My wife Jane and I just celebrated out 14 year at the station.  I have 3 grown children, and 5 grandchildren ranging from 21 to 5 years of age.  When I’m not enjoying family or music, I’m watching movies….during Spring, Summer and Fall seasons,  you’ll find me out on a golf course.  I’m so thankful that I GET to do this work that I do.

Like most stations, we’ve been dealing with all of the repercussions of Covid 19, not only on our station but in our community and state as well. FUEL FM and its sister stations have continued to encourage our listeners with positive messages by many of our artists.  We have a couple of events coming up in the next few weeks that we are involved with…Unity Family Night at our local minor league baseball parking lot….with recorded performances by Matthew West, Zach Williams, We the Kingdom and others shown on a large screen and played through the car speakers.  Along with that, we’re still holding “The Outing”, our annual golf event to benefit our ministries.

We do our best to get out into the community and engage on a 1 to 1 basis every chance we get. It’s obviously been more difficult this year with the cancellation of so many festivals and parades that we are usually a part of, but we’re still doing what we can.  Since FUEL FM is a 24/7 Hot AC/CHR station, we provide a larger, wider variety of music than our competitors, as we have 3 AC’s in the market playing pretty much the same thing, as well as the recent addition of Air1.  Our “FUEL” sound is consistent in our music, our imaging, our onair approach, etc.   Our market is the 14th most ‘unchurched’ city in the nation, so our goal is to move out and reach the ‘one’…as well as encouraging believers.

Best programming advice I ever got was to lead by example. Never require something of your staff that you’re not willing to do yourself.  I’ve worked for many programmers who had the ‘don’t do as I do…do as I say’ mentality.

I’m glad that we have the amount of Christian Radio Stations we do in our market. I believe the competition makes all of us better and since I’m all about the ministry part of it, I know that FUEL FM won’t be for everyone’s taste….but they may be reached or comforted by one of the other station that is doing their thing.

Regarding podcasts, what is your opinion on doing them, is it necessary do to one, etc?

We have a relatively small staff, so as much as we want to do podcasting, we haven’t done them just yet. I believe they are a growing part of who we are and what we do…but you’d better be sure that once you open up the ‘can of worms’, you can continue to do them on a regular basis…and do them well.  Our goal with an updated station app and website forthcoming that we will begin podcasting soon.

I’ve read some great articles recently challenging radio to not be so afraid to expand our sound and playing new artists. I think testing is great, but if you think about it, the BIGGEST artists in our format were ALL new artists at some point in their career.  Some music director or programmer had to step out and take a chance on some of these artists…and many have grown to be some of the musical anchors of our format.

So much of radio’s creativity is gone. So many stations are playing the same thing, doing the same thing, the same way, because that’s the way that we’ve been trained.  We’re concerned more with ratings than serving the listener, and reaching…”the One”.  I remember when stations in small markets were the pacesetters to the medium and large market stations, especially when it came to music.  We were the ones who could and would take a chance when we believed in a song….and it often led to the artists breaking out and having success on the larger stations.  Now, so many are setting back and waiting to see what everyone else is doing.  I still believe that a ‘great song’ by an unknown can be a breakout song…and contrary to what is preached, you CAN be hurt by what you DON’T play.

I grew up in the Detroit area, and later went to college on the west side of the state, so I was influenced folks like Dick Purton, Arthur Penthallow Jr. , Kenny Calvert, Larry Lujack and Jonathan Brandmeier.  They were real, relatable and you felt like the two of you were just hangin’ out together.